Formed by Grammy-nominated musician and record producer Simon Emmerson, Afro Celt Sound System is a European and African based collective which has forged a reputation for energetic, uplifting shows. Winners of the Songlines 2017 Best Group award & nominated again in 2019, they combine folk traditions of different cultures in a unique and innovative way.

They will be playing just 3 festival dates in 2022 – Knockengorroch Festival, Cambridge Folk Festival and Lakefest – whilst work in underway on a new studio album.

With sales now topping one and a half million albums and two Grammy nominations to date, Afro Celt Sound System released their last album ‘Flight’ in November 2018 to widespread critical acclaim…. “multicultural thought and motion at its finest” Daily Mirror, “captures the exhilaration of their live shows……its spirit and invention are unflagging and uplifting” Observer, “The voices really do take flight” The Sunday Times (Culture). The album explores themes of migration – both human and avian – with a dazzling cast of stellar musicians from around the globe. 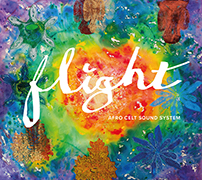