Easy Star All-Stars is celebrating the milestone 50th anniversary of the Apollo moon landing with a series of shows in Europe in Summer 2019, which will include full plays of their landmark Dub Side of the Moon album, along with a mix of material from the rest of their catalogue.

Blending musical versatility, instrumental prowess, beautiful vocal harmonies and a premier rhythm section, Easy Star All-Stars have established themselves as one of the top international reggae acts on the scene for the past 15 years.

Thanks to their best-selling tribute album releases, Dub Side Of The Moon (2003), Radiodread (2006), Easy Star’s Lonely Hearts Dub Band (2009), and Easy Star’s Thrillah (2012), the remix album Dubber Side of the Moon(2010), as well as original releases Until That Day EP (2008) and First Light (2011), Easy Star All-Stars have built a growing, dedicated fan base throughout the world. They’ve toured in over 30 countries on 6 continents bringing together fans of reggae, classic rock, dub and indie rock into one big family. 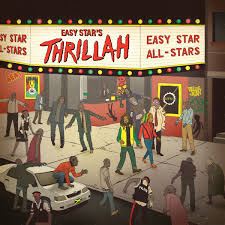